Likely surprising no one, recent analysis from Variety Intelligence platform (VIP+) reveals that cord-cutting expanded amongst consumers in 2022, as eight of the top traditional TV companies experienced a combined 31% decrease in subscribers over the last year. While many fear the worst for cable and satellite providers — imagining a fate similar to the now-nearly defunct Blockbuster — there may just be a savior for companies by offering broadband and free ad-supported streaming TV (FAST) services.

The first quarter of this year has seen a loss of at least 3.2 million subscribers across the board for companies such as Altice USA, Charter, Comcast, Dish, Verizon, and more. In Q1 of each of the last three years, there has been a decline of between 2.2M to 2.4M members for these services, with Q1 2022 being the biggest yet. 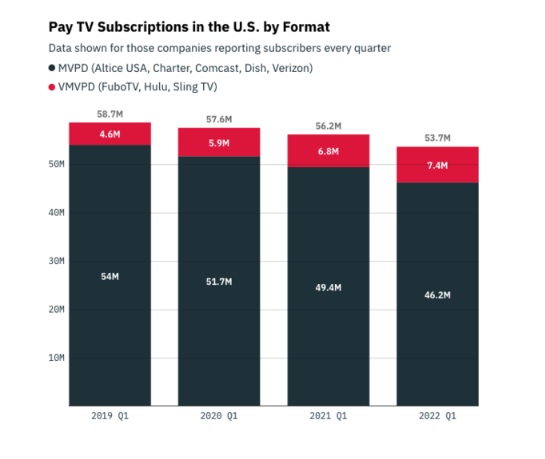 In contrast, live TV streaming services like fubo TV, Hulu, and Sling TV have seen a combined rise in the first quarter of 2022, albeit a not-so-impressive one of about 642,000 new subscribers. This figure has been the lowest in recent years from the three platforms. It is not unusual for the first quarter of the year to be especially difficult for content providers as many consumers choose to unsubscribe at the conclusion of the pro and college football seasons.

Despite that bankable fact, with losses rapidly growing for traditional TV and growth slowing for virtual Multichannel Video Programming Distributors (vMVPDs, essential live TV via the internet), there is cause for concern that some consumers are choosing to exit the system entirely.

While it may seem that these companies will soon be lost for good, there is some hope for those with the infrastructure in place to offer broadband. Internet subscriptions are far more profitable for companies as they do not require paying several different partners individually, as is necessary when providing TV. Platforms must pay carriage fees to rights holders in order to broadcast their content, which can get increasingly expensive.

Unlike pay-TV, broadband has seen steady broadband increases every quarter since 2018. In the first quarter of 2018, there were 57M broadband subscribers in the United States according to VIP+, that total has risen to over 69M as of 2022.

With the White House now backing plans to subsidize broadband access to more rural areas across the country, it appears that there is far more room for growth for these companies than in TV. 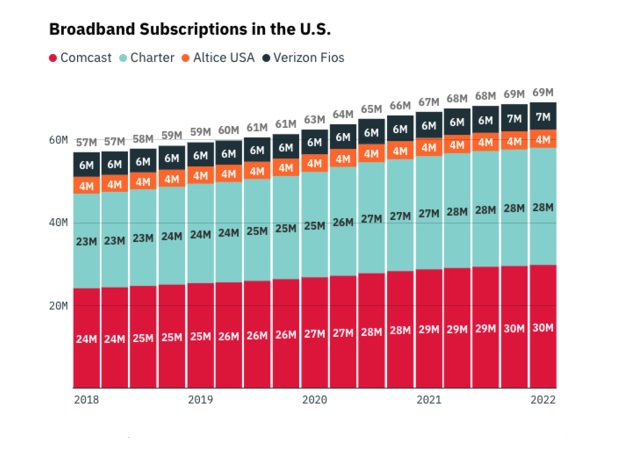 And with eUTV coming out of the gates hard, we see a new breed of TV streaming service that’s hard to beat. EUTV combines a sports package with Live TV channels, movies channels and so much more that it’s poised to push these cable and satellite providers over the edge!

It may seem like cord-cutting is on a mission to wipe out every cable and satellite provider, but all is not lost for many of these companies. If they play their cards right and are willing to adapt and invest in new revenue streams, there can be plenty of options for generating profits going forward.

This website uses cookies to improve your experience while you navigate through the website. Out of these, the cookies that are categorized as necessary are stored on your browser as they are essential for the working of basic functionalities of the website. We also use third-party cookies that help us analyze and understand how you use this website. These cookies will be stored in your browser only with your consent. You also have the option to opt-out of these cookies. But opting out of some of these cookies may affect your browsing experience.
Necessary Always Enabled
Necessary cookies are absolutely essential for the website to function properly. These cookies ensure basic functionalities and security features of the website, anonymously.
Functional
Functional cookies help to perform certain functionalities like sharing the content of the website on social media platforms, collect feedbacks, and other third-party features.
Performance
Performance cookies are used to understand and analyze the key performance indexes of the website which helps in delivering a better user experience for the visitors.
Analytics
Analytical cookies are used to understand how visitors interact with the website. These cookies help provide information on metrics the number of visitors, bounce rate, traffic source, etc.
Advertisement
Advertisement cookies are used to provide visitors with relevant ads and marketing campaigns. These cookies track visitors across websites and collect information to provide customized ads.
Others
Other uncategorized cookies are those that are being analyzed and have not been classified into a category as yet.
SAVE & ACCEPT